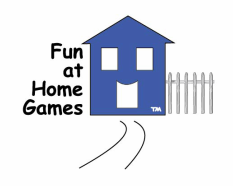 Who Are We? And Why are We in Business?

Fun At Home Games, LLC™ was created in 2005 as a method of producing and publishing our first game; Swashbuckled!™, an exciting pirate game set in the year 1806.  In the summer of 1989, Dick Bennett wanted to keep his children from playing too many video games, so he came up with the idea of creating a board game which would be both fun and educational.  An educator by profession, he wanted the game to assist in teaching children and adolescents geography, history, arithmetic and other subjects in a fun and meaningful way.

During the summer, Bennett introduced the idea to his son Richard, who was immediately interested.  The two of them spent hours finding exotic destinations around the globe and coming up with ideas for games. Soon, the idea for Swashbuckled! was born.

Father and son drew out their ideas on a couple of maps and large sheets of paper and played it with family and friends, who enjoyed it so much they encouraged the pair to publish it.  But the two of them were often side-tracked and could not figure out how to do it.  Years later, after moving from Canada to Utah, the two brought in the youngest son David, and recruited a family friend, and fellow board game lover, Dennis Andersen, into the group.  In 2005, the four of them created Fun At Home Games, LLC™ and began publishing games with the help of Scott Sargent, a professional designer.

For an excellent introductory video of Swashbuckled!, our fun pirate game, click here.  It is one of the finest pirate board games on the market, filled with secret treasures, Lord Nelson battleships, changing weather patterns, war zones, treasure islands, and so much more - all taking place in the year 1806. We realize that the name of our game may be confusing to some folks who mix up the name of  the game with "Swashbuckle" or "Swashbuckler" but we're too far down the road now to change names. By the way, our game - its title, playing rules, board, money pieces and cards -  is copyrighted and protected under law.

Running a game-making business on a part time business can be a very challenging - and expensive - business. We learned that nothing is as addictive as one's own idea.  At first we had no idea how to market our game successfully. However, we persisted and have learned the ins and out of designing, manufacturing, shipping, and marketing good quality games. We are pleased to announce that we have sold several thousand units of our game in the past few years.  As of now -- August 2017 -- we have just received another 2,540 units from our Chinese manufacturers.  This latest edition also includes rules to our new Cut -Throat version of SwashBuckled! which is a very aggressive and exciting form of the game.  It will go on sale at the Midway (Utah) Swiss Days September 1, 2017.

​Plans are also in place for producing a new "Wagons West" board game for 2018. We are also contemplating helping others with their game design/production plans and proposals. Stay tuned!

Fun At Home Games is in business to